Photos courtesy of The Electric Canvas

SYDNEY – The iconic sails of the Sydney Opera House were transformed into a digital canvas showcasing brilliant and lifelike projections to celebrate the Hindu festival of Diwali, and to observe Remembrance Day.

Designed, planned and executed by Christie's longstanding Australian partner The Electric Canvas (TEC), the stunning projections were made possible using 14 Christie Crimson 3DLP® laser projectors. The projection system was installed in four compact structures at the Overseas Passenger Terminal, some 400 meters from the Opera House on the opposite side of Circular Quay. TEC's technical team set up and programmed the Crimson projectors with their usual aplomb and efficiency, ensuring pixel-accurate alignment of each projector with the Opera House's architecture. 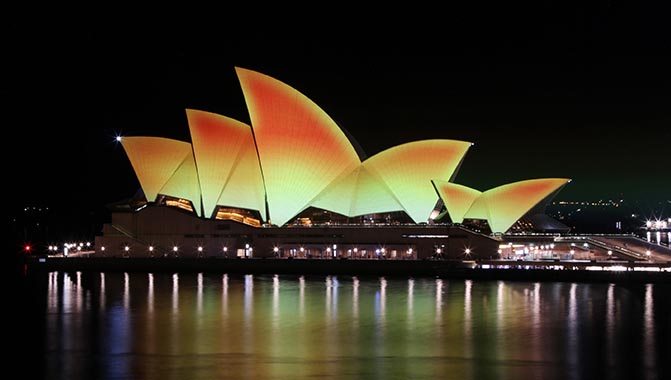 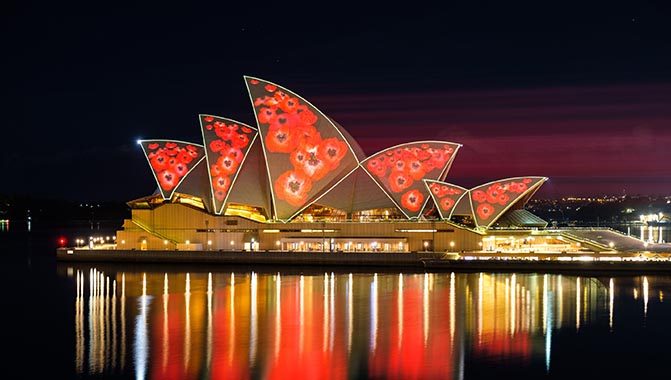 "It is always an honor when the NSW State Government entrusts us with creating projections onto the sails of the Sydney Opera House to commemorate many of our country's cultural events and anniversaries," said Peter Milne, managing and technical director, TEC. "We have relied on our trusted fleet of Christie Crimson laser projectors for these significant occasions. Not only do they deliver big, bright and intensely colorful images for amazing visual experiences, we are also impressed with the reliability of their solid-state laser light source."

TEC's in-house creative content department designed and produced the imagery for both occasions. For the Diwali celebrations, the Crimson projectors displayed brilliant hues of yellow and gold on the Opera House's façade to signify the ceremonial candlelight lit by Hindus to celebrate the spiritual victory of light over darkness on this occasion, also known as the festival of lights. This is the sixth consecutive year that TEC has been called upon to illuminate the Opera House for Diwali.​

For Remembrance Day, a delicately animated treatment of a sprawling field of burgeoning poppies – a symbol of sacrifice and loss – was projected onto the sails of the Opera House in a subtle and poignant manner. Commemorated annually on November 11, it honors members of the armed forces in Commonwealth member states who lost their lives in active duty. This marks the fourth year in succession that TEC has been invited to create mapped projections onto the Opera House to remember those who had fallen.

Michael Bosworth, Executive Director, Head of Enterprise for Asia Pacific, Christie, commented, "We are delighted that Peter and his team at TEC chose Christie's Crimson projectors to illuminate the Sydney Opera House for Diwali and Remembrance Day. With their long-lasting brightness, rock-solid reliability, ​ TruLife Electronics, and BoldColor Technology, the Christie Crimson Series combines the best in solid-state illumination technology with the brightness and color that both fixed and live events stagers demand in today's ever-evolving marketplace."​

Recognized as the Southern Hemisphere's only dedicated building projection specialist, TEC has delivered hundreds of projects in Australia and abroad using a wide range of Christie projectors from the J Series to Boxer Series for architectural mapping, field of play and large-scale immersive projections. These include "The Spirit of Fun" (Vivid Sydney), Gold Coast 2018 Commonwealth Games Opening and Closing Ceremonies, and the Christmas Gold Lotto City Hall Light Spectacular in Brisbane.