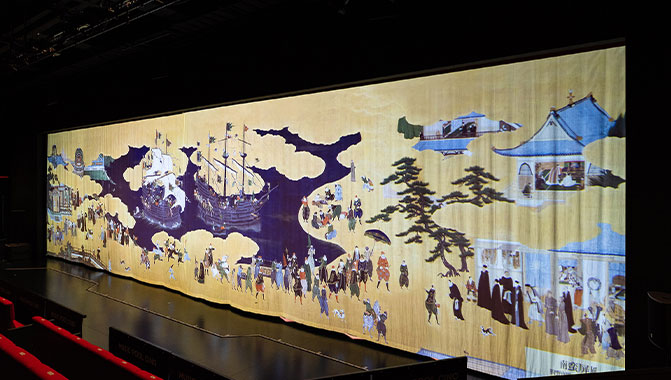 TOKYO –Christie® is pleased to announce that Senzoku Gakuen College of Music (SGCM) has adopted its 4K projection and auto calibration solutions for the “digital curtain” of its new theater, named MUSIC POOL CINO, which opened on August 17.

SGCM chose to use a “digital curtain” instead of installing a traditional Japanese tab curtain – made from a single or several pieces of fabric with elaborate embroidery widely considered to be a work of art – to provide entertainment and boost MUSIC POOL CINO’spublic image, as well as to surprise, impress and uplift audiences before a performance. This “digital curtain” is the first of its kind to be installed in an educational institution in Japan.

Professor Makoto Shinohara, Head of Musical Theatre Course, SGCM, said, “When audiences enter MUSIC POOL CINO for a performance, a still image is displayed so it looks like a normal stage curtain. The surprise comes when visuals on the curtain begin to move a few minutes before the show starts.

A spokesperson from Ushio Lighting Inc. added, “Since images are projected on the curtain, its edges may shift back and forth under the influence of air conditioning or atmospheric pressure, resulting in distortion or deviation of the portion where two images blend. Christie Mystique software has been introduced to overcome these misalignments. The ability to quickly adjust and maintain multiple projector projections makes troubleshooting easy for the user.” 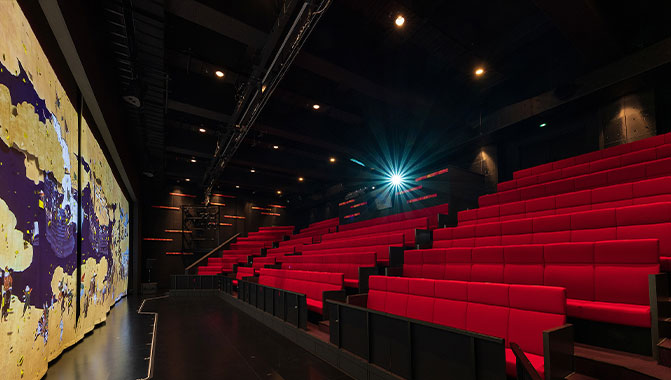 Content was produced for the digital curtain by Naked Inc. and is based on “Nanban Byobu” by renowned 15th century Japanese painter Naizen Kano. This “Byobu”, or the folding screen itself, is from the Azuchi-Momoyama period in the late 1500s, which depicts colorful and gorgeous Nanban (foreign) ships, buildings and people that arrived in Japan from ports in places such as Spain and Portugal.

Prof. Shinohara noted that the digital curtain of MUSIC POOL CINO has been designed to draw attention to art, not only for visitors but also for current students of SGCM, students preparing to enter the university, and international students.

“Musicals are a stage art that originated in the West and are often performed around the world. In addition to traditional musicals, we are also creating original musicals in Japanese. This is why we selected “Nanban Byobu”, which is a mixture of Japanese and Western styles, and the projector reproduces the details of this elaborate work brightly and vividly,” he added.

Michael Bosworth, executive vice president, Enterprise, Christie, commented, “We are delighted that SGCM has chosen our Boxer 4K30 projectors and Mystique to deliver extraordinary digital projections on the stage curtain ofMUSIC POOL CINO. This is a brilliant demonstration of how Christie’s various technologies can breathe new life to a traditional art form, and enable our partners and customers to transform their creativity into reality.”

About Senzoku Gakuen College of Music

Senzoku Gakuen College of Music was established in 1967 by Senzoku Gakuen, an incorporated educational institution, with the aim of cultivating a love of music and fostering a rich humanity. The school provides students with a wide range of education in music as well as in-depth education in each field of specialization. For more information, visit www.senzoku.ac.jp/music/en. 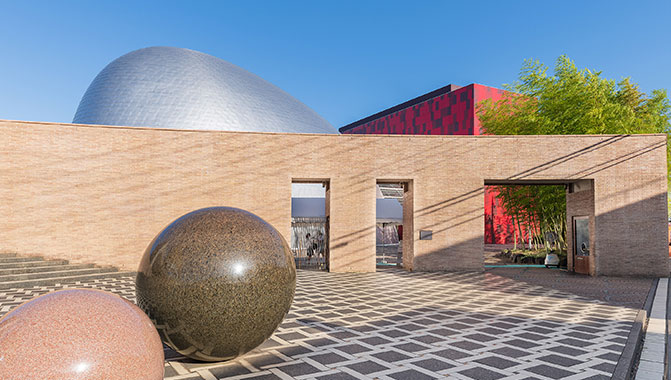